Meet Sam, the man behind the legend that is Milenomics.  He gets a very brief into, despite being awesome, since his interview is quite in depth,enough chatter, lets meet Mr Milenomics!

What’s been Your Earning strategy in the tournament?

As you’ll see later I haven’t had a single strategy. Some of the overall goals I’ve set this month have been trying to replenish my Membership Reward points. I’ve got some Double Down flights coming up which would be slam dunks for using those. I also have a strong need for about 50k SPG in the next month or two so I’m going hard on my wife’s SPG card to earn those. My strategies next month will be much different. My need for specific points and miles dictate how I will attack a month, and my lack of needs will also help me to stop earning certain Miles.

Other, more general focus has been on my Amex Blues. I wanted to use up my $6k on each of my two before switching to a 5% card. I’ve also been focused on the Fidelity Amex card, which is such an underrated card. I’ll go so far as to say it is the #1 travel/cash back card. (sorry Barclay’s)

What is the easiest way to earn a ton of miles?

By far the easiest way to earn a ton of miles is by applying for new cards. Frequent Miler illustrated this last March, and I think this tournament has shown it again to be true.

For someone to churn big you need a few things, good math skills, great money management skills, banks which are abundant and friendly, a bit of capital and the right cards.

For someone to earn the same number of miles via credit card signups requires a pulse and a good credit score.

I guess that then begs the question, why bother earning miles instead of just going 100% cash back?

Certain miles offer flexibility that can’t be matched with paid tickets. Booking premium cabin awards is almost always better with miles than with Cash Back. But one of the cornerstones of Milenomics is that once your travel has been booked with miles, and you don’t have a short term need for more miles, stop earning them.

For specific needs miles can be better than cash back. For example A 22,000 mile Double Down booking could represent a $600 ticket and could be earned with just $11k spent at a grocery store on a gold PRG. Not many cash back cards can match that. For those last minute, high cost tickets miles are almost always a better idea than cash. Also, using more cards also spreads your risk of AA around by using different weapons for different targets.

Cash is king the world over. Miles are great (I mean I didn’t name the blog ‘Cashnomics’ after all), but they’re not always the right choice. Nothing is stopping you from spending on both a mile earning and a high cash back card as well. There is always a place for Cash back cards, but don’t assume the biggest hammer is always the right tool for the job.

What was the most eye opening part of the tournament for you?

Week 1 was really eye opening for me. I underestimated the rules of the tournament. In some ways I didn’t realize how much I took for granted the stores around me, and my access to cheap miles. I also tend to focus on doing more in less time, so spending 2 hours in one day on this was not a great use of my time.

Halfway through week 1 I started having car trouble. I actually had to put my car in the shop for a week. In the process I gained a new appreciation for those living in major cities without a car, and how much a car really factors into the ability to earn miles. This is all part of why travel time (and costs) go into my cost tracking sheets for purchases of miles.

I value one hour of my time at $25. I’ve used that “T-Rate” for everything from calculating the “cost” of long layovers, to keeping track of how much I put into earning my miles. Once I saw my total time spent in week 1 I knew I had to readjust and work quicker, there was just too much wasted time and travel.

What adjustment did you make between Week 1 and week 2?

The adjustment I made meant spending less of my time cashing out same day, and holding more overnight. My daily churn is a 9 hour circle, which takes me from: 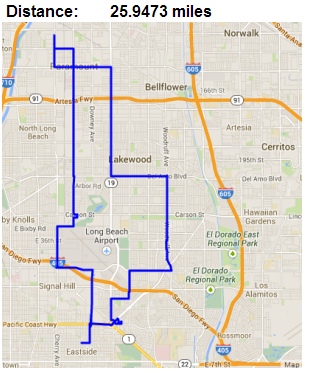 By incorporating this into my daily drive to/from work I can discount most of my travel. This also means I don’t usually purchase much on weekends. The Tournament saw me pushing hard on weekend #1, and wasting a ton of time and travel in doing so.

Also, my last stop is almost never cashed out during the same day. Having to backtrack and cash out during week 1 was eating so much time up. I started to hold these overnight in week two. This cut tons of time out of my spending but meant my bankroll was getting smaller and smaller some days. I also started spending more than my bankroll in week 2 which allowed me to not have to keep track of a daily limit.

What other changes have you made week to week?

Going into the tournament I wanted to treat each week as separate and unique. This is something I do in real life. I’m not a fan of hitting the same store day after day after day. I think it draws too much attention, and it also tires me out. I tend to visit one store during one week, then cool off and hit another store during the next week. When I come back to store #1 I’m usually greeted with “where have you been?” rather than “oh, you again.”

This also gives stores time to restock, and helps keep me fresh. I’ve shared on my blog that the one month I needed to go to Wal-Mart every day for 30 days straight was probably rock bottom for me. After that many days of constant repetition I felt terribly burnt out. Variety works for me, for someone else repetition might be their thing. Everyone is different.

For the tournament my week over week my strategies were:

Week 1 I went heavy on PayPower, Univision and Green Dot Products. I also earn my gas rewards during the first week of most months to give me 8+ weeks to use them.

Week 2 I focused almost entirely on Vanilla Reloads and cutting out the $3.95 fee when I bought them.

Week 3 saw me switch to my T-mobile Card and Reload-it Packs/ I also started using my Bluebirds which were on the sideline during weeks 1 and 2.

Week 4 My goal was to end the month with resale opportunities, but Kohl’s leaving the UR mall put an end to that. I should have had a backup strategy for this week–being able to change directions instantly is a key to turning a negative into a positive.

If you could have changed one thing in the contest what would it have been?

I would rather it have been in April 😉 Kidding… As much as I would love to have won the whole thing, I have had a great time. I would have probably focused more on the fees and time and travel angle. Maybe even make it a 1 week thing, where we could drill down into each day a little better.

For some Trip Dip/Quadruple dip options a smart player could best a 5% player in the short term, say under $1500 a day. Sheer volume ends up skewing things very heavily towards the top earning cards, and while that’s the goal in the real world, I don’t think it translates into the true pitfalls and issues that a day to day reader will face trying to churn a modest $5k-$10k a month.

I think the tournament has been great fun, and want to thank Matt for organizing it and Frequent Miler for judging it. Oh and sorry about the mess of a spreadsheet I submitted in week one, looking back on it I can’t see how it made sense to anyone but me.

Let’s talk about Fees–You’ve got some days where you spent $4k and were only out of pocket $.70 in fees.

I always want to avoid fees whenever possible. In fact there are so many great, under-reported ways to avoid fees I would suggest readers focus on the fees first, and then scale up from there. When you’ve got a great 5% card you might think fees don’t matter–but everything matters; time, travel and fees.

A clean, efficient churn will scale much easier than a messy, wasteful one. That should be everyone’s goal, to ramp up production while holding costs in check.

Can you give away one trick that you’ve used in the tournament?

Sure–I’ll give this one: Start small and win over your cashiers. A good way to do that is by finding Fee Free products like these Green Dot Visa Cards:

Because there is no cost to buy the card you could literally start with just $50.25 on the first card. You’ll learn about how the product works, how to cash it out, and you’ll draw much less attention from a cashier who’s on high alert for $500 purchases. You’re also playing with less money to start.

I’m a firm believer that we learn more by doing than by listening to others. Actually purchasing and working on cashing out these small dollar amount cards is a great way to learn about what works, what doesn’t and what to watch out for.

Play the Person, Not the Store

No fee cards are also great to test the waters of stores you’re not sure will allow you to buy on Credit. No matter how little you put on the card you’re not out a fee, and you have a potential cashier to take note of.

I say cashier and not store because you should play the person, not the store. It is pretty well known what store registers allow which purchases with CCs. The issue then becomes the cashier. Whatever the store policy the cashier is the one person who has the final say in your purchases. Keep notes of who works when, and what days, and plan around that cashier, not just that store.

Fact finding missions are great to do when you’re out on current shopping trips. I keep a list of cashiers and stores, and interesting facts about the cashiers (daughter is in college, always plays pool on Saturday, etc). Showing an interest in the person behind the counter can go a long way, as can those wonderful words, “Please” and “Thank You.”