Staff member
Knowledge is so important, everyone seems to know that, however many people don't bother gaining it. The value in true knowledge is that it extends beyond the learning event. As I current put myself through some serious exam related topics for a certification I can see that a root problem here is that people cram 'data' but not knowledge.

A recent example of knowledge came through my DIY projects at home. I swapped out a bathroom ceiling fan in what turned into a massive project. It may seem trivial to you, but it was pretty epic.

The problem was that I bought a super dooper ceiling fan, it actually turned out to have 3 different switches (main light, night light and fan) built into it, and I only had 1 switch on my wall. The solution I came up with was to trace the internal wiring and combine them into just a single circuit. Figured out where all the lines lead to, and combine them into master Black, White, Green: I had to then create a bigger space in order to accept the larger unit, and add in a brace of wood which I would use to attach the fan to the ceiling: When I got the fan secured, there was now a large hole in my ceiling, before I fixed that and closed in the unit I decided to get everything working on the other end first.... I cut a second hole from the attic in order to be able to adjust the fan and attach the ventilation tube. I ran the tube under the false flooring (drywall) and out of the box you see below. Having closed up the drywall by just putting a large sheet on top and screwing it down. The next step was to lay new insulation around this, and then screw down boards to walk on: Once secure, I headed back down to 'clean up' that giant hole that was in my bathroom ceiling. I cut out some dry wall to fill the majority of the space, and used joint compound (mud) to fill in the cracks. The first coat of compound was a bit ugly, but after coat #3 the ceiling required almost no sanding before applying ceiling paint. Was it worth the hassle?

This simple job of swapping out a fan actually took me about 3 days to complete, that is the way of things when multitasking. I probably spent about 6hrs of time doing this.

In the end, I got a new fan. But I also got knowledge.

Overall, I gained confidence in my abilities to handle problems like this. Whereas it might seem logical to outsource all these jobs that are outside of our wheelhouse and focus on 'the core job' we have, sometimes doing something that seems laborous and time consuming adds massive value.

I gained a really strong knowledge of my attic space, If a laborer had been hired for the job they may or may not have noted that new insulation would be a good idea, whereas now I really know where the strengths and weaknesses are here. It is knowledge beyond the moment.

This is something that worries me somewhat with the mindset to MS too... people might say 'go earn $250 in MS and pay a guy' but there is no knowledge from MS (if spoonfed) so you are spending your time and not gaining knowledge beyond the moment. If you have 'invested' 500 hours standing in line at a Walmart you might well have gained some great skills in learning when to huff and puff and roll your eyes... but when Walmart stops allowing your money order transactions, where are those skills being put to use?

It is important to factor in the forward value of knowledge when considering the value of your time, and also, it feels pretty good to be able to fix things yourself.

Continuing your analogy, if someone makes a mistake doing DIY electrical work, they can cause a fire. Someone without proper knowledge can really mess themselves over in the MS arena as well.
S

In the trades, this is known as an owner inflicted improvement.
A plus for your perseverance!

Supporter
That whole process is something I strongly identify with. I tend to have an attitude of thinking that, if the information is available online, I can read/watch it enough times to be able to do it.

Which, you know, usually works pretty well. I replaced two bathroom vanity tops and installed new faucets for both of them, and removed two bathroom light fixtures, spray painted them with a brushed nickel finish and rewired and replaced them. I completely refinished the cupboards in both bathrooms and my kitchen.

But, in changing the faucet and shower head in the one bathroom, where the original plumber had installed the fixture backwards, I couldn't get it to quit dripping, and ended up torquing the pipes so hard that they broke.

OTOH, I would have paid close to that for just the new fixture, if I'd gotten it at retail from any of a dozen plumbers, and now I know that "finger tight" really really means that, in plumbing. Even if the fingers belong to a woman in her 60's.

Staff member
Actually my next project is resweating the pipes in my house since getting hold of a good plumber is like pulling hens teeth... probably have a go at that on the weekend.

I went through a similar learning experience with pipes in my house too, been working under the crawlspace to melt frozen pipes/insulate/heat etc and it really adds a lot of confidence to me in terms of 'knowing' what is going on around you.
F

The tricky thing is knowing your limitations. A little knowledge is great and goes a long way, even when contractors are doing the work. Guys in the trades make a surprising number of mistakes. Unfortunately, often you've got to be the supervisor. I focus on learning the things I'll do again, or make sense for me to do. Knowing the theory behind the best practices is a great framework

Matt - a couple hints: You want the fan duct to go up and then run downhill a little bit so any condensation from moist air hitting the cold duct runs out of the house rather than back into your new fan. It also looks like your ceiling joists are 2x6s, and you'll want more insulation than you can pack in the joist bays. Maybe I'm wrong, but from the picture it looks like fiberglass in the joist bays. PM if you want to know more.

Oh, and wires through the metal knock-out hole is a no-no. Should run them through a clamp.
Last edited: Feb 12, 2015

This does remind me of some minor home repair I did. I used my knowledge as a dentist to fix a concrete step. 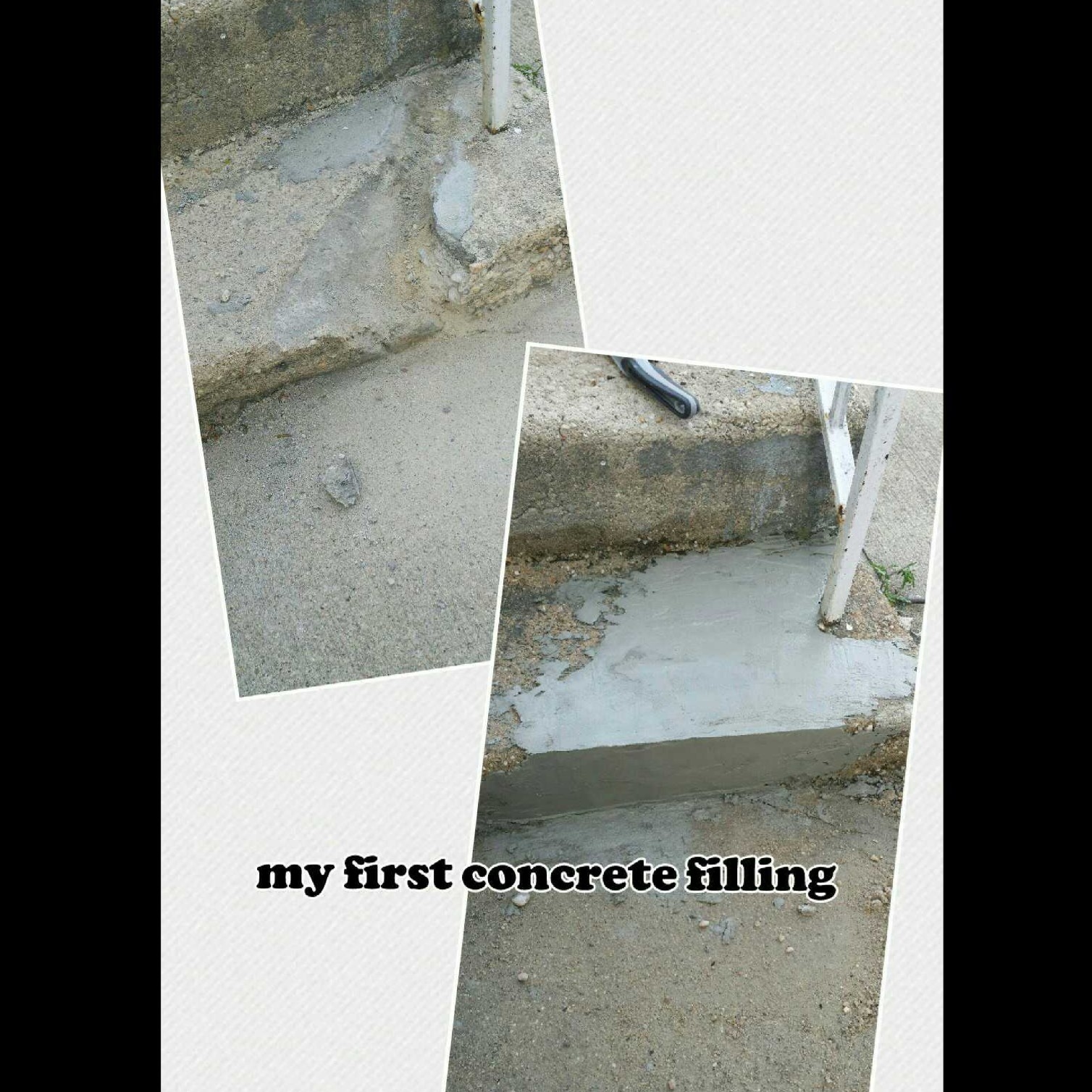 Not the prettiest, but it worked.

I had a similar thought on replacing an existing ceiling fan as it was getting noisy. Spec'd out replacements, even replacing the motor. Then, I googled noisy fan and ended up watching avid on cleaning and lubricating the squirrel cage. Saved me a couple hundred bucks and god knows how many hours if i couldn't fit it in the exact opening as the 40 yr. old one that was in there....
Note: i second the wiring concern. There are threaded clamps that hold the wires secure in the punch out circle. Should it vibrate over time the insulation could wear and short.
Kudos on staying the course and seeing it through.

Supporter
Worst do it yourself replacement, ever?

I didn't do it, thank god. My intrepid husband did. Replaced the attic fan, that had died--it was set by the builder to turn on when the attic temp hit 80F--ridiculously low, s/b about 100F or even higher.

He removed the old one, and we ordered the new one online. The day he removed it, the outside air temps were hovering near 90, and the day he replaced it; mid to upper 80's. Which means that the temp in the attic was, on both days, well north of 100F.

I made him stop every half hour or so, come down into the cooler air and drink water, as we were advised by the owner of the website where we bought the replacement fan.

Another strategy, that we have used, is to hang around while the job is completed.

For example, we hired an electrician to install some ceiling lights when we moved into our current townhouse, and my husband kept him company, helped when appropriate, and asked a lot of questions while the electrician worked. As a result, H was able to inquire about the condition of the insulation in the attic and learn a fair amount about our wiring.

Of course not all contractors will agree to this, but most of the people we have hired are happy for the company and enjoy talking about their work. They are glad to stay up on the ladder if we are around to hand up a tool or flick a light switch. We end up learning quite a lot and sometimes make a new friend.

As with all things, it helps to be genuinely nice and sincerely curious. You also need to know when it is better to back off and get out of the way!
Share:
Facebook Twitter Google+ Reddit Pinterest Tumblr WhatsApp Email Link
Top